About Lincoln the Unknown, by Dale Carnegie 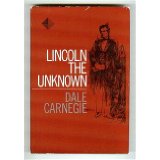 I haven’t read much about Lincoln.  I’m glad this is the first book about him I chose to read.  It’s a good book—easy to read and yet quite comprehensive in terms of his personal life.  Overall, my impression of Lincoln from this book is that he was a man full of sorrow and sadness.  He never appeared to be happy.  He walked with his head down and mumbled a lot. But there was also another side of him.  He was a story teller, and he drew crowds with his stories.  He was also a lover of humor and jokes and poetry.  I suppose we could say that he used these to help him cope with his great sadness.

Why was he sad?  There were a number of things that brought it on and kept plaguing him throughout his entire life.  When he was just a youngster, life was especially hard.  Both of his parents were illiterate and were quite the hillbillies! His father, I would say, was well intentioned but was ignorant of most things and had no sense of money.  His mother never took too well to pioneer life (in the Kentucky woods) and died at age 35.  I felt especially sorry for the Lincolns when I read how they lived.  Their home made cabins (more like shacks) were of three walls, a dirt floor and no windows or doors (but one wall was missing so that served as the door!) It was more like a temporary shelter to break the wind—and it was cold in the winter.

When Abe grew older his life began to be just like his father’s.  He was sort of a drifter and worked at whatever job he could find.  Though he had some schooling, for the most part he was self-educated—and he loved to read.   He had a good friend in Ann Rutledge, whom he grew to love deeply—but she died of Typhoid.  Lincoln was never the same after that.  He never loved anyone again like he loved Ann.  He married Mary Todd, but I don’t know why, except that at the beginning he had sort of an attraction for her, and because he had foolishly made a promise to her that he would.  And he was a man of his word! Oh was she ever a crazy, kooky woman!  She nagged at him constantly, and yelled at every one else too!  She was quite an embarrassment to him and a constant trial for him.

The only positive thing I saw in Mary Todd was that she made Abe dress better and encouraged him to run for political offices.  But she was not thinking of her husband; she was thinking more of her own standing in life.  Her aim in life was to be married to the president. So, though Mary Todd was a constant thorn in Abe’s side, God used her to bring Lincoln into the presidency and ultimately to save our nation, the United States.

The last sorrow for Lincoln was of course the Civil War.  Oh how many died and how much weight was on his shoulders for their deaths.  But he was use to sorrow and he was God’s chosen instrument for that time.  Yes, now we see Abraham Lincoln as a great man, and a great leader.  A man chosen by God to unite a nation and to free slaves.  Yes this man, like one other, was “a man of sorrows and acquainted with grief.”  A man whom God brought to us for our freedom and blessing.  Thank you Abraham Lincoln!

I'm an author, a self publisher, and a painting contractor. I live in beautiful Minnesota, USA . Welcome to my blog site.
View all posts by Stephen Nielsen →
This entry was posted in Notes on Books I'm Reading and tagged Abraham Lincoln, American presidents, Ann Rutledge, Civil War, Lincoln, Mary Todd, sadness, sorrow. Bookmark the permalink.

2 Responses to About Lincoln the Unknown, by Dale Carnegie