Should you speak to Satan in your prayers? Why or why not

This is a question that will bring different opinions.  Some, in their prayers, speak to Satan all the time.  Others warn against it.  Here is an excerpt from my book, Prayer A to Z, on this subject.  Please tell me what you think.

Now, in the battle, if you are counting on being victorious, especially if you want to pull many souls out of hell, you must increase your prayer efforts.  Plan on spending more time in prayer, and be more serious in your prayers—fast, and cry out to God for all the burdens He puts on your heart.  Likewise, don’t worry about what to pray for.  If you plan the time slot to pray, God will give you more than enough to pray for.  Moreover, He will direct your prayers each step of the way.

And when it happens in your prayers (and in your counseling) that Satan comes against you and tells you lies, don’t be surprised and don’t quit praying.  Also, don’t give into him or run away.  Like David against Goliath, speak back to him and run to the battle line to meet him! 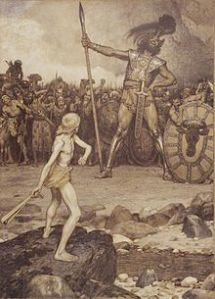 Here is actually what happened as recorded in 1 Samuel 17:42-48.  When Goliath saw David, he disdained him because he was a youth.  And he said to him, “Am I a dog that you come to me with sticks?”  And the Philistine cursed David by his gods, and said to him, “Come to me, and I will give your flesh to the birds of the sky and the beasts of the field.”

And what do you think David did?  Run away?  No no.  He said back to Goliath,

“You come to me with a sword, a spear, and a javelin, but I come to you in the name of the Lord of hosts, the God of the armies of Israel, whom you have taunted.  This day the Lord will deliver you up into my hands, and I will strike you down and remove your head from you.  And I will give the dead bodies of the army of the Philistines this day to the birds of the sky and the wild beasts of the earth, that all the earth may know that there is a God in Israel, and that all this assembly may know that the Lord does not deliver by sword or by spear; for the battle is the Lord’s and He will give you into our hands.”

Wow!  David certainly wasn’t at a loss for words.  And when Goliath drew near him, verse 48 says, “David ran quickly toward the battle line to meet the Philistine.”  And he stuck him dead with a single stone and cut off his head!

Now, what I am saying here is that when sin and Satan come up against us we should not be at a loss for words, nor should we retreat.  Go after Satan and pray against him.   You can even speak to him and use the Word of God (the sword of the Spirit) against him.  Jesus did it three times in the wilderness and we can do it too.  Say to Satan and the demons, “I am in Christ and I have victory over you.  I now resist you in the name and power of Jesus Christ who conquered you at the cross.”

But don’t speak too much with Satan or his demons.  Don’t argue with them.  They are just swine and don’t deserve your time.  They won’t listen to you much anyway.  Instead let God take care of them.  According to Spurgeon,

[When Satan attacks us] do nothing but this: cry to his Master against him…set the mighty One upon him.  He who accuses you, refer him to your Advocate.  When he brings your sin before you, throw the blood of atonement in his face…Quit battling with the wily foe.  Do not answer the old deceiver.  If he tells you that you are utterly lost, acknowledge it. Then cast yourself at Jesus’ feet, and he will overcome your foe and set you free.

I would say that the best thing you can do to help you pray against Satan is to study the Word and memorize Scripture, especially those references that tell you who you are in Christ.  They will be your best defense against Satan because he is always accusing you and trying to make you feel guilty.  At those times you can say to him, “Be gone Satan; God’s Word, in Romans 8:1, tells me that I am free forever from condemnation.  In fact, Romans 5:1 tells me that I have been justified in Christ.   And that means I am completely forgiven and made righteous.”

I'm an author, a self publisher, and a painting contractor. I live in beautiful Minnesota, USA . Welcome to my blog site.
View all posts by Stephen Nielsen →
This entry was posted in Prayer A to Z Excerpts, Vigilance in Prayer, Prayer Warfare and tagged prayer, prayer warfare, prayers, Resisting Satan, Satan. Bookmark the permalink.