Joel 2:30-31
“I will display wonders in the sky and on the earth,
Blood, fire and columns of smoke.
31 “The sun will be turned into darkness
And the moon into blood
Before the great and awesome day of the Lord comes.
NASU
Matt 24:29
29 “But immediately after the tribulation of those days THE SUN WILL BE DARKENED, AND THE MOON WILL NOT GIVE ITS LIGHT, AND THE STARS WILL FALL from the sky, and the powers of the heavens will be shaken.
NASU

What I am talking about is lunar eclipses. And it just happens that these four eclipses will happen on Jewish festivals—on Passover and on the Feast of Tabernacles. 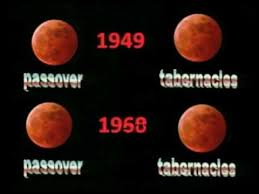 In recent history when four blood moons occurred on Jewish festivals significant things happened. For example, when it happened in 1493 and 1494 Jews were expelled from Spain. The blood moons in 1949 and 1950 came right after the nation of Israel was assembled, giving the Jews a homeland for the first time in thousands of years (pictured on the left). And in 1967 and 1968 it was linked to the Six-Day War.

I am not an expert on this subject but I have found two men that are.  Click on these short videos if you want to be informed about this.

I'm an author, a self publisher, and a painting contractor. I live in beautiful Minnesota, USA . Welcome to my blog site.
View all posts by Stephen Nielsen →
This entry was posted in Understanding the Times and tagged biblical prophecy, divine judgment, Joel 2:30-31, Judgment of God, lunar eclipse, Matthew 24:29, signs in the sun moon and stars, signs of Jesus' Coming. Bookmark the permalink.