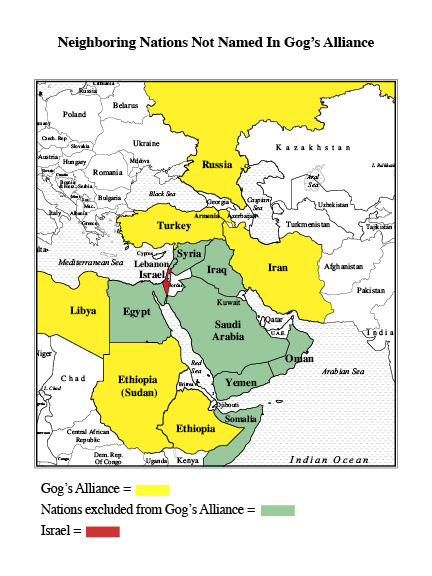 The leader nation which will invade Israel will be Gog, which many scholars believe to be modern day Russia.  The other nations will be Gog’s allies—Persia, Libya, Gomer (Turkey), Ethiopia, and Togarmah, all of which are Arab Muslim countries, haters of Israel (vv. 1-17).

And the word of the Lord came to me saying, 2 “Son of man, set your face toward Gog of the land of Magog, the prince of Rosh, Meshech and Tubal, and prophesy against him 3 and say, ‘Thus says the Lord God, “Behold, I am against you, O Gog, prince of Rosh, Meshech and Tubal. 4 “I will turn you about and put hooks into your jaws, and I will bring you out, and all your army, horses and horsemen, all of them splendidly attired, a great company with buckler and shield, all of them wielding swords; 5 Persia, Ethiopia…